The 7 Best Pho Restaurants in Arizona! 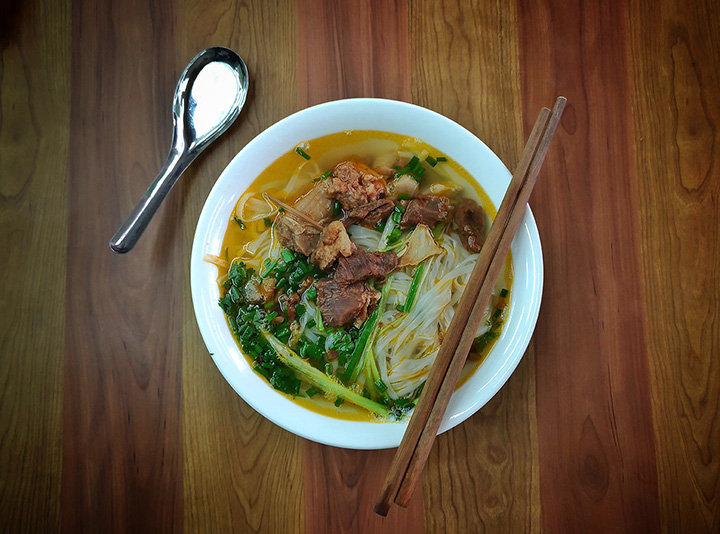 Pho is a Vietnamese noodle soup that has exploded in recent years. It may seem new, but this delicious dish has been a Vietnamese staple for generations. This tasty soup, made with broth, rice noodles, sliced beef, and a flurry of herbs, is simply scrumptious. Brace yourself for a hearty bowl of pho at these 7 restaurants in Arizona.

There’s no denying that Unphogettable is a quality pho restaurant. For one, it’s authentic. The owners emigrated from Vietnam in the late 1970s and brought their delicious local delicacies to the Valley in 2008. Located in the Asian market Mekong Plaza, it’s a real find for those looking for authentic Vietnamese fare. Unphogettable is known for their legendary pho. They have 16 different varieties, eight types of meat, and even vegetarian options. Each well-sized portion is served with bean sprouts, basil leaves, jalapenos, and lime wedges.

Get ready for some serious spice at Pho Dalat. This Vietnamese restaurant is known for their spicy broth rated on a scale of 1-5. Even fans of spicy food will admit they tap out at a level three out of five. The crowd favorite is the spicy beef vermicelli made with perfectly cooked broth and noodles. Pho Dalat, located in Tempe, is also known for having some irresistible spring rolls and equally appealing lunch specials.

Step inside Pho Number One and you’ll be greeted by a modern restaurant and a mouthwatering aroma. Pho Number One has all the staples of a great Vietnamese restaurant: pho, spring rolls, and even Pad Thai made with pho noodles.

Bring your appetite to Pho Thanh. This downtown Phoenix hotspot has over 150 equally appetizing menu items. They have a number of pho options made with tasty broth and tender meats. Make sure you save room for some of their renowned shrimp spring rolls during your trip. Pho Thanh may have amazing dishes, but it’s their deals that keep customers coming back multiple times per week. You can get a great entrée and appetizer for under $20.

Tucson residents don’t have to go the Valley to enjoy tasty pho. That’s because they have Dao’s Tai Pan’s right in their backyard. This esteemed Asian restaurant offers the finest tastes from China, Thailand, and Vietnam. Pho fans have their choice of a dozen options of rice noodle soups. The best option is the Pho Xe Lua. It’s an extra-large bowl of steak, flank, tendon and tripe slices served with basil, bean sprouts, and jalapeños.

Pho 43 has been a go to spot for hungry Phoenicians for over 25 years. That longevity can be attributed to their otherworldly pho. They have over a dozen options that each comes with rich broth, your choice of meat, and a large portion of vegetables. Located on the west side of Phoenix, this neighborhood spot also has some of the best deals in town. Each steamy bowl of pho is less than $6. Save room for dessert. Their macaroon ice cream sandwiches are a fan favorite.

Timing is everything. That’s certainly the case at Pholicious, a modern Vietnamese restaurant located in Tempe. Their steaming hot pho bowls are served up within five minutes of ordering. Each of their bowls combines flavorful broth and healthy ingredients to create a stellar pho experience. You can also choose between beef, meatballs, chicken, fish balls, shrimp, seafood, or a vegetarian option.