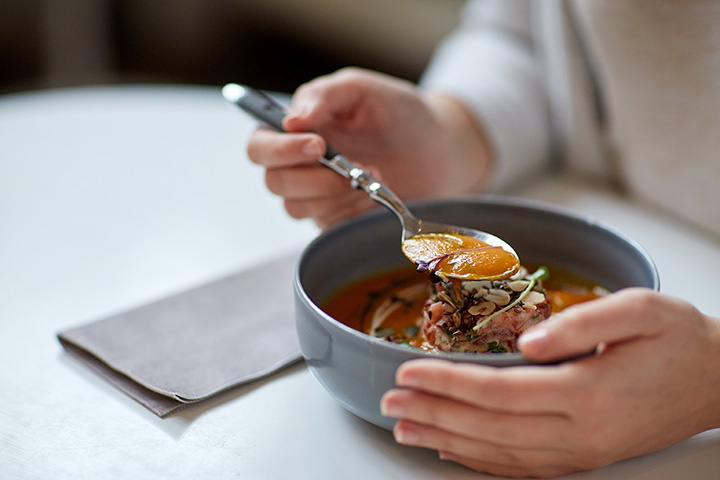 Arizona’s diverse cultural landscape is represented in its cuisine, making the soup options here truly splendid. Whether it’s a cup of autumn pumpkin soup or a hot bowl of southwest black bean soup you crave, these 9 best soup places in Arizona have you covered.

Pho Avina is a Vietnamese restaurant specializing in a style of soup called pho, which consists of a flavorful broth, rice noodles, herbs, and meat. On Pho Avina’s menu, you’ll find a wide array of flavorful pho soups, along with many other different types of rice noodle soup, egg noodle soup, and even more choices, so there’s sure to be something for everyone in your dining party.

Pane Bianco serves one staple soup: vegetable. It’s a simple, yet delicious soup with a light broth and chunks of fresh veggies that sells out on the reg, so don’t be late for lunch, or you’ll risk being disappointed. If you get lucky enough to secure a bowl, be sure to pair it with a slice of house-made focaccia for a delightfully delicate lunch.

With 10 different soups on the menu, it’s no secret that El Sur knows that variety is the spice of life. Here, you’ll find albondigas, caldo de pollo, caldo de queso, tortilla soup, beef soup, and pozole, to name a few. There are vegan options on the menu, too, so no one’s left out in the cold sans soup. Each soup is made using recipes passed down from the family, so you can be sure they are truly traditional.

At Ollie Vaughn’s, fresh, seasonal produce always commands the soup menu, meaning from one week to another, choices are likely to vary. Soup fans aren’t likely to care, though, as each flavor is made from scratch with love (and local ingredients). Try the soup and sandwich combo for lunch. It is the talk of the town, after all!

In Tucson, Bison Witches bar and deli offers sandwiches, cold salads, appetizers, and more, but one of their best menu items by far are their bread bowl soups. Five soups adorn the bread bowl menu, with chili being one of them, if you consider that a soup. Not a fan of the bread bowl? Then you’ll want to opt for the half sandwich and soup special.

At Arizona Bread Co., the bread is the star of the show, of course, but the soup is pretty special too. Each soup of the day is handmade the chef, and can be ordered by the cup, bowl, or even quart. Try the cup of soup and half a sandwich combo so you don’t miss out on the good stuff. Tempe cheese panini, we’ve got our eyes on you.

Crackers & Co. isn’t exactly new to the soup game. They’ve been around since 1984, after all. Daily, you’ll find each of their three locations serving up several varieties of house-made soups, from chicken dumpling to vegetable beef to the restaurant’s namesake chili. You really can’t go wrong, whatever you choose.

With more than 20 soup options over the course of a week, it’s no wonder why soup lovers alike flock to Randy’s Restaurant to get their fill. There’s tomato parmesan, taco chili, navy bean, and a whole lot more to be had here. Pair a bowl of one of their tasty house-made soups with a slice of cornbread and you’ll be anything but disappointed.

With 12 valley locations, you can always find a wholesome bowl of soup at Wildflower. Some locations serve as many as six different varieties daily. To view their rotating soup menu, check out the Wildflower website. We wouldn’t want to miss out on the autumn pumpkin or forest mushroom, though. They speak directly to our souls.